Uncategorized Travelling with Kids II: The ups and downs of family biking

Travelling with Kids II: The ups and downs of family biking

Almost three weeks in China have already passed, but we still have not achieved our goal of starting out early, that is to say before 11 am (see Reisen mit Kindern I). Instead, with every day our departure time becomes later and later. This excludes from our daily program the long relaxing lunch stop, to which I had got used to from my former tagging along Volker’s biking groups. Now instead of one, we make at least 20 stops, but neither of them is long, and most are not relaxing.

We still haven’t got out of town when Sarah needs to go to toilet. 15 min later a shout comes from Nora that she wants to make pipi. We are finally nicely rolling again when Nora’s cushion falls on the road and has to be picked up. Then Sarah drops her baby – new stop and again retracing. Then it is time again to stop for toilet. Then the kids scream for ice-cream – a stop at a shop follows; as it doesn’t have a freezer, we stop at the next, and at the third, all without result, and then the pink vanity box of Sarah drops on the road as we are in the middle of a strenuous ascent. We roll down with full impetus when Nora drops her green pencil. We glimpse local shrines, pagodas or surreal construction landscapes on the way, but we no longer stop and explore: because we know, any moment there will come a new outcry from the trailer that an urgent stop is needed. After two weeks of interrupted biking Volker became convinced that the kids consciously attempt to boycott our journey.

To give the kids credit: it is not easy for them. Not only do they miss their friends and their Kindergarten, but they have to sit for 4 hours a day in the trailer, while the journey might become rather monotonous. “Mir ist langweilig!” and “Wann sind wir endlich da!” are heard from the back as often as singing and chanting of invented rhymes. And when we stop, Sarah and Nora are exposed to the well-meant but unnerving attention from the curious crowds. “Look, foreign kids!” “Those girls are so beautiful!” “What white skin!” “And what big eyes!” “I find the smaller one cuter!” “And I like the bigger one!” Sarah draws the helmet further down on her eyes, hides her face behind her baby-doll and tries to shrink and look away from the crowd. Anyway she doesn’t understand the comments in Chinese.

But the worst comes shortly after the first wave of curiosity is satisfied: “Let me take a photo – Hello, Hello!” “Hey, little friend!” Sarah starts to scream as the mobiles are pushed into her face. It is of no use to explain that the kids are shy and that they don’t like to be taken pictures of. With a smile, “Ah, is it so?”, the spectators merely shift to a different angle and raise their mobiles again. The only solution is to flee. In the last days a consensus has been reached: Sarah allows other kids to take pictures of her, but for adults this is still a no go.

Sarah’s lifesize baby draws almost as much attention as our real kids. Especially older people are always eager to touch it and strike it, which again induces immediate protests from the protective Sarah-mama. Although nowadays dolls are commonly seen in the shops, they never belonged among the traditional Chinese toys. Chinese kids played with figures of animals, never with human ones. But how to explain to Sarah that the old lady who extends her shriven hand towards her baby, never had a doll herself. 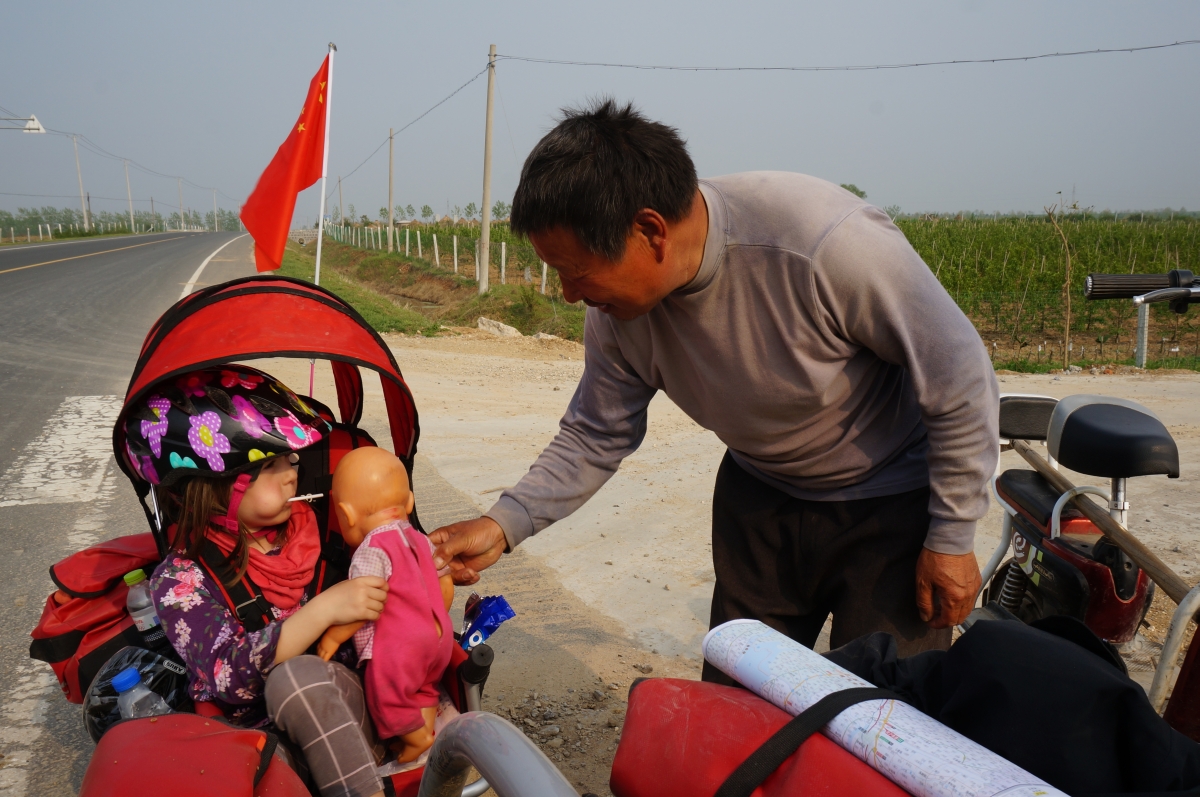 Well, China has its rewards too.

The novelty of the Imperial Canal might have worn itself off; the geese, ducks and goats we encounter on the way are hardly worth a glimpse any more, but the instance any of ubiquitous cars, planes or plastic sheep that stand in front of the supermarkets appear, immediate cries for a stop come from the back. Often we comply. For some reason, sitting for half an hour in a static Thomas the Tank Engine or in a plastic duck is much more fun than doing the same in the trailer that moves through picturesque villages and fields. Especially when this is accompanied by a big ice-cream.

All those stone lions, elephants and bizarre stones from the Taihu lake that we encounter everywhere, offer wonderful ground for climbing and mountaineering.

The most enjoyable time for the kids comes in the evening, when we arrive in a new town. There is always a new hotel to explore, some of them designed with unleashed fantasy and truly imaginative approach to European architectural styles. And with no sparing of gold and glitter: golden wallpaper, golden elephants, golden fish, golden Nike on a golden chariot. We had a night in a room taken out of the Thousand and One Nights (named the Arabian Room), slept on a perfectly round bed, and on several mornings woke up among gilded walls.

And then we go out among the lights and bright neon signs of all these “small“ provincial cities in search for dinner. “Ah, wie schön ist China!”,- gasp the children every night. Sarah gets the impression that there is a street party every evening no matter where we stop. On the town squares there will always be groups of women of all ages, dancing to music: a sight seen in every Chinese town from the Eastern Chinese Sea till Xinjiang province in the west. Fascinated, Sarah stands and watches and watches, while Nora pulls me to join the dancers.

After dinner comes the obligatory stop at a supermarket to renew our supplies of water, fruits and 3-in-1 coffee. A whole new world of cookies, bonbons and unheard-of sweets for the kids to explore.

The long day ends with an episode or two of “Wickie und die starken Männer” on Volker’s tablet. This not only unwinds the kids, but aids our biking on the next day as well. Whenever there comes a bridge or an ascent, the whole family goes along with fictive rowing:

And on top of the mountain we are.