You all know that classic movie scene where a guy in a crisp business suit throws his arm out and yells, “Taxi!” and one instantly appears. May be in New York, but not in Nanjing.

On the way out of Nanjing the family ways separated again. We decided to spare the kids the supposed hectic traffic and construction sites at the outskirts of the city, and to treat them to a train ride instead. Taking any of the frequent trains in direction Shanghai would bring us in 20 min. to our next stop: the city of Zhenjiang, 80 km away. In the morning Sarah’s baby took her seat in the trailer and was securely buckled up, Volker started with his single passenger in direction east, while we left for a relaxed day at the Nanjing Museum, before going to the train station in the late afternoon. 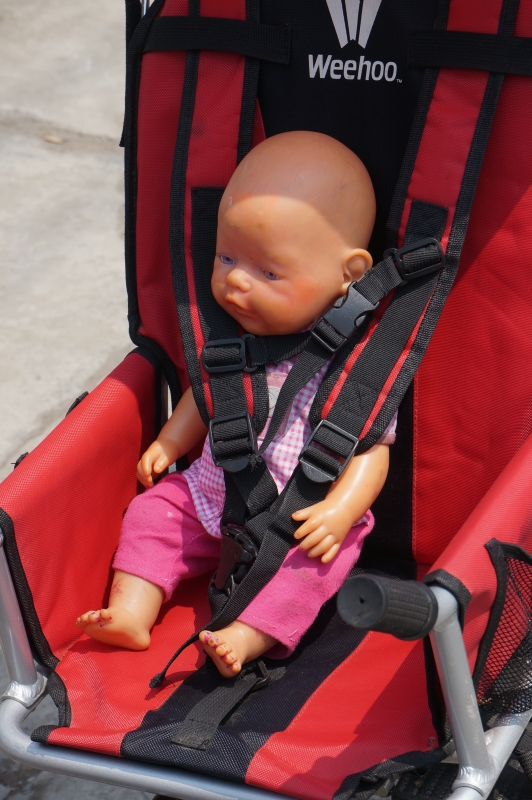 The museum was founded in the thirties, when Nanjing was capital of the Republic, – as the National Central Museum, and has been undergoing extensive reconstruction and expansion since the late nineties. Nowadays it comprises spacious modern buildings and halls in addition to the older part which is designed as a traditional Chinese temple. As in most major Chinese museums the admission is for free. 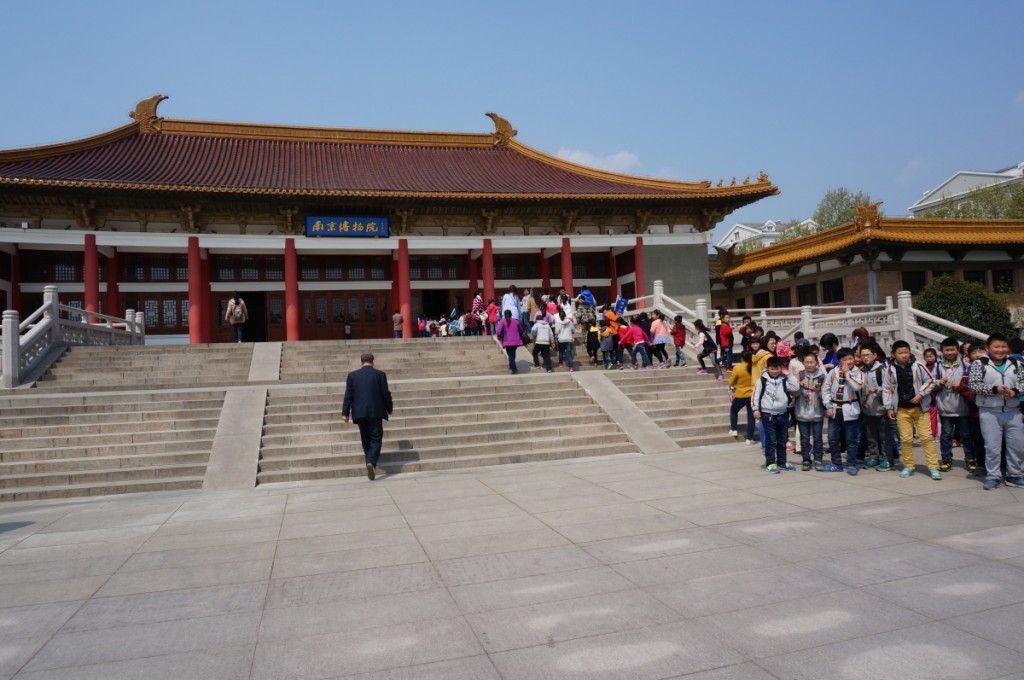 Sarah and Nora found the combination of Chinese art with generous portions of cookies and sweets very enjoyable. When appreciating ancient sculpture and porcelain threatened to become boring, they took out their drawing pads to create art of their own right under the ancient artefacts. Nobody of the friendly staff minded,- instead, they were trying to steal a picture of the foreign kids on their mobiles. 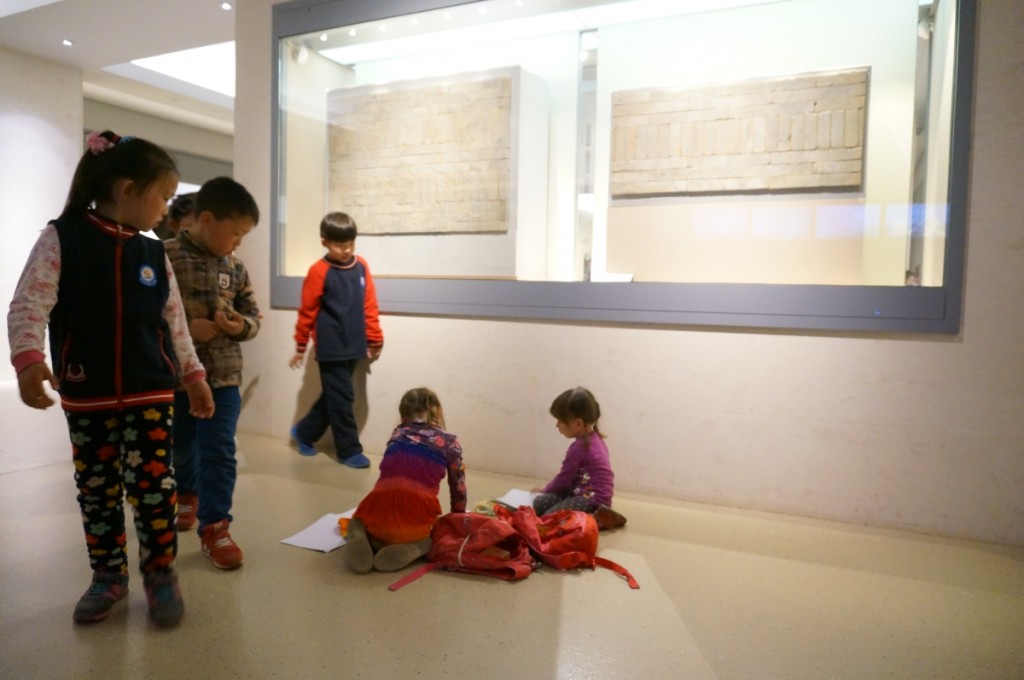 Around 4 p.m. we had to leave, after having managed merely two out of the six big exhibition halls. The plan was simple enough – take a taxi back to the hotel, quickly get our luggage, and proceed to the train station. We went out of the gate, I looked at the sea of cars and motorbikes in the 8 lanes in front of us and realised that we were in trouble. Rush-hour! Standing at the curb waving arms wouldn’t help, for the cars and taxis were separated from us by a wide lane for motorbikes. I took Nora up, braced myself, and with Sarah clutching to my legs, crossed the rolling stream of bikers, to stand right between them and the solid mass of cars. But how to draw the attention of a driver two lanes away? And even if he notices you, how would he make it through the traffic jam to the curb?

I desperately flagged down every car – with or without the red light which indicates that it is for hire. Just the day before we were picked up at the Ming tombs by a taxi which already had a passenger in it, so one never knows. But taxis were scarce, the few passing by were either occupied, or the driver refused to notice us. After 20 min. one stopped, but upon hearing our itinerary, apologetically explained that he would not make manage to go back to his base in time. Sure, shift-change! Usually between 16.00 and 17.00, coinciding with the rush-hour,- and I have managed to forget about both. To make things worse, I realised that for the first time ever I am out in an unknown city without a map or a guidebook (that’s what relying on Volker’s navigation leads to!), that I am laden with two small kids, who exactly at this crucial moment refuse to walk, and that I am out of sweets to sooth their whimpering. Nanjing has 4 urban metro lines, however, reaching any of the stations in these circumstances was out of question. I moved to a more strategic position at a busy intersection few hundred meters away. Three policemen aided by several traffic controllers were trying in vain to put some appearance of order in the helter-skelter traffic. I spent the next hour rushing from one corner of the intersection to the other, frantically waving hands and yelling. Twice a taxi I flagged down was grabbed in front of my eyes by more agile couples, not burdened by kids. I was screaming in desperation at yet another apparently empty taxi passing us by, when a policeman walked purposefully towards us through the traffic. Uh-Uh! Now we will be chased away for disrupting public order. The policeman asked instead sympathetically: “Are you trying to hail a taxi? Forget it at this time! You’ll better go to the metro – I’ll show you the way”. I explained that the kids are tired and not willing to walk, and that we have to catch a train, and is there any taxi-dispatching service existing in Nanjing? The policeman went back to his colleagues, and after a brief council one of the traffic controllers came back, and told us to go to the sidewalk and wait – the police will help us get a cab. This is how Operation “Taxi” started on Zhongshan East Rd. One policeman positioned himself in the middle of the intersection, the other two took each one of the streets. But even for the police authorities stopping a taxi in the rush-hour was not an easy task. The drivers ignored them as much as they had ignored me. It took more than fifteen minutes until an empty taxi stopped, but after hearing the first words from the police the driver started forward again. The policeman had to grab the door and refuse to let him go, until the driver finally conceded to take us. Thus for the second time in the last ten days Chinese police came out of their accord to our rescue. Contrary to all clichés, they were friendly, helpful and efficient.

The rest of the day was rather uneventful. While it took us two hours to get to the hotel 4 km away (including the taxi hailing), the journey to Zhenjiang was completed in less than an hour, including purchasing the ticket. I realised yet again that the times of the crowds pushing at the ticket counters, which are out of tickets for days ahead, of the overcrowded smoky hard-seat trains (my usual means of transportation back in the nineties), are long, long gone. Only getting a taxi in the rush hour seems to have become more difficult.