Uncategorized On a Daoist Pilgrimage with Revolutionary Characteristics

On a Daoist Pilgrimage with Revolutionary Characteristics

It is a mixed experience to visit physically a certain place, with which one has been familiar only through descriptions in old literature. The previous night I reached Mt. Mao in the Jiangsu province, which I knew from texts written 1 500 ago as one of the most sacred Daoist sites in medieval China. While Volker is biking from Liyang, I use the day to explore together with Sarah and Nora the real mountain of the present.

In the morning we step out of the imposing portal of the hotel, ready for the unknown. An old lady is washing clothes in the artificial pond next to the tripods. Across the road there is the equally imposing visitors’ centre, likewise of marble and glass, with a huge yin-yang symbol in the front square. While Sarah and Nora happily hop from yin to yang and from yang to yin, I survey the tourist map of the region. 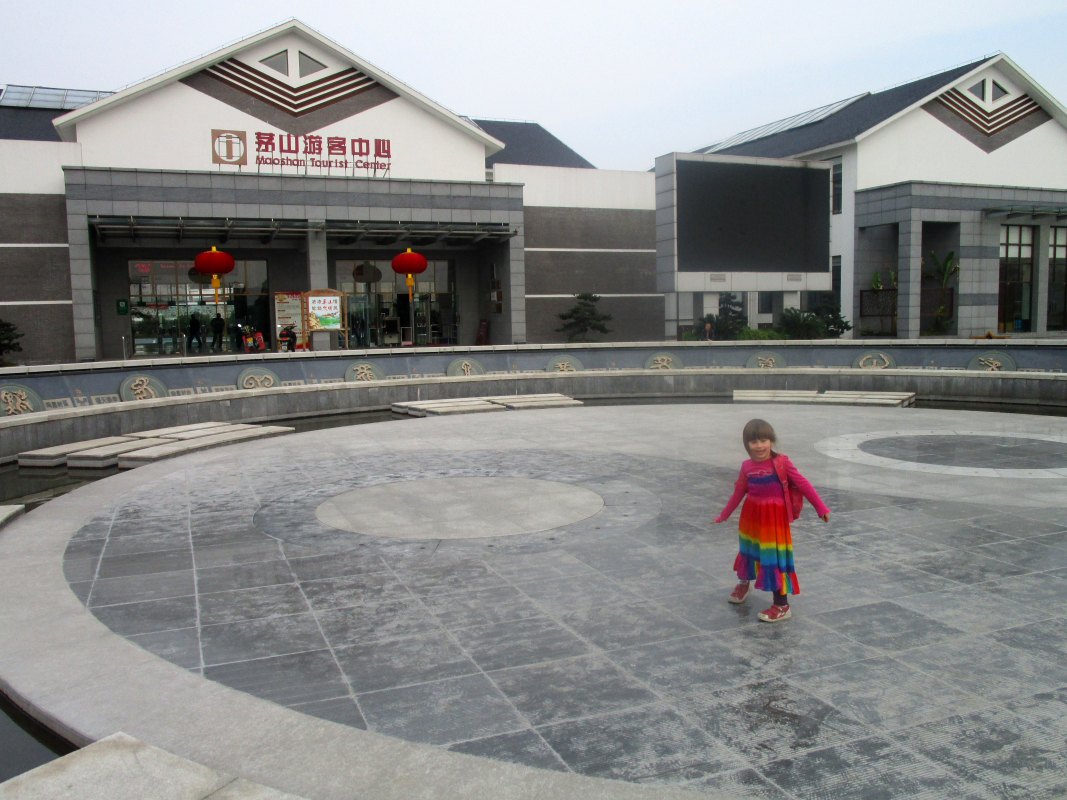 Mt. Mao is not a particularly big mountain – it has merely 372 m. in height. Nevertheless, it was extremely significant in medieval China, being the centre of the Supreme Purity (Shangqing) Daoism, which was the dominant Daoist tradition of those times. Since its establishment in the 4th-5th centuries this school addressed the higher social classes, and during the Tang dynasty it enjoyed generous imperial patronage. The relatively small Mt. Mao contained more than 250 temples, halls and other religious edifices, all of which were destroyed during the Taiping rebellion in the mid-19th century and during the Anti-Japanese War of 1937-45. Two expressions keep on propping out from the billboards, restaurant and hotel signs around: „Blissful Land“ and “Grotto-heaven”, – both denoting a Daoist subterranean paradise. In Daoist lore Mt. Mao was considered to be the location of the first of the “Blissful lands” and of the eight of the “Grotto-heavens”. It contained within its recesses a perfect world in miniature, full with eternal light and ever-green vegetation, that was exempt from calamities, wars and death.

“Mama, is this an airport?”- asks Sarah as we step after the security check into the spacious hall with numerous ticket counters, ready to accommodate hundreds of pilgrims. An electrical mini-bus takes us up the winding road to the highest peak with the Temple of Myriad Blessings of the Nine Heavens. The first sight that looms on the top of a hill is, however, no Daoist temple, but the Anti-Japanese War Memorial. I quickly learn that during the Sino-Japanese War Mt. Mao was the base of the Jiangsu New Fourth Army. The Daoist First Blissful Land was designated by Mao Zedong as one of the six major sites of Anti-Japanese resistance. Close by is a Memorial Hall of the New Fourth Army, and a Centre for Patriotic Education. The next sight up the mountain is an enormous shining Laozi, sitting on a mountainous slope and dwarfing the temples beneath him. The small bus is filled with elderly pilgrims from the district town of Changzhou, who cheerfully chat and inquire whether we, the only foreigners to be seen far and wide, also go to “baibai”, pay respect to the gods. We all get off at the peak of the Eldest Mao (not to be confused with the family name of Mao Zedong). Legend has it that during the 2nd century BC three brothers named Mao practiced arts of immortality on the mountain, attained the Way and ascended to heaven as immortals. The three major peaks were named after them. The Peak of the Eldest Mao offers wonderful panorama of the undulating smaller peaks below and of the broad plain around, interspersed with lakes and ponds.

Bus after bus unloads crowds of cheerful pilgrims who purposefully march towards the gate of the temple, laden with incense and paper offerings.

We join them and quickly pass through the entrance hall with the guardian deity and the gods of the four directions, through the hall of the Patriarchs of the Supreme Purity tradition, and step into the courtyard with the bronze censor. Pilgrims clutter around, busy earning merit. Holding incense sticks with clapped hands, they energetically bow in each of the four directions to honour the celestial beings. 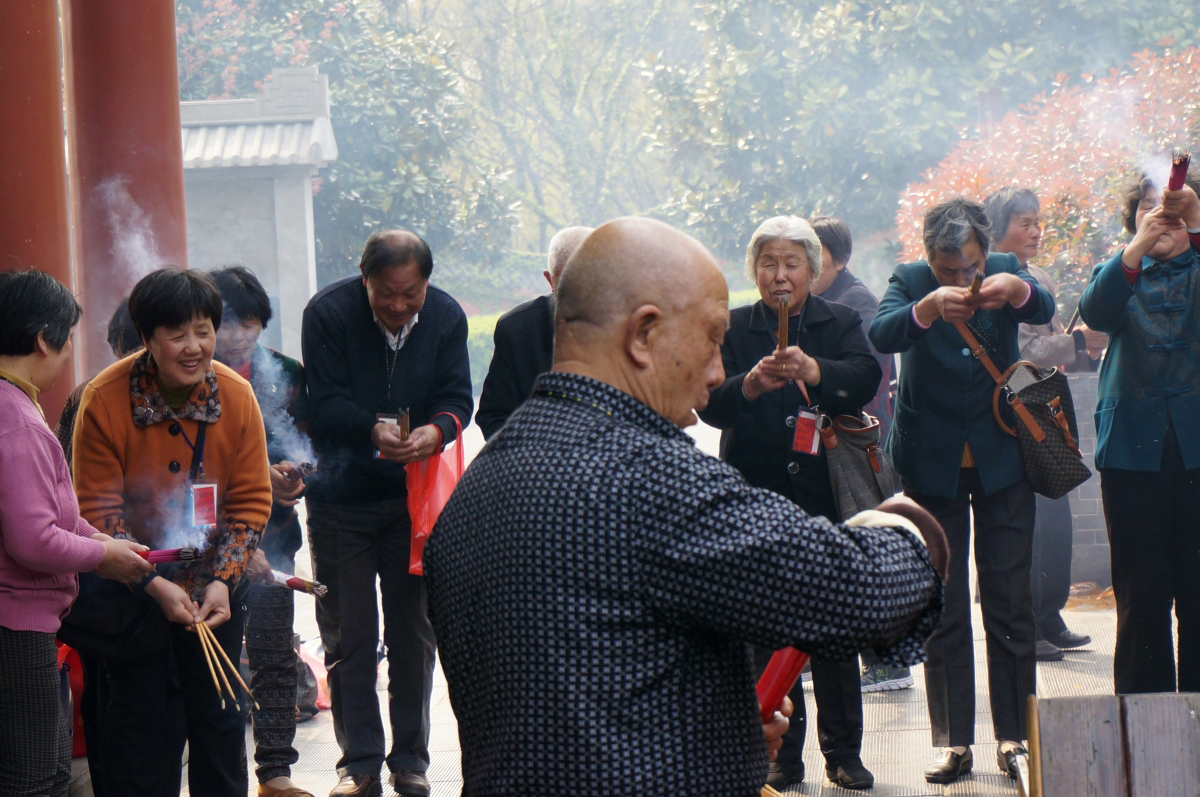 The instructions for „civilisation pilgrimage“ at the entrance advice the devotees to burn only three sticks of incense, more would be wasteful. However, many pilgrims still trust sheer quantity as the most efficient way to influence the gods. Inside the halls and the temple shops one can buy even thicker and longer bundles and pyramids of incense at exorbitant prices.

We light three incense sticks in front of the three Mao brothers, and the reward, in the form of apples for Sarah and Nora from an young Daoist monk, is quick to follow.

The temple was burnt down during the Anti-Japanese War and built again in the late eighties. I search in vain some idle Daoist master to inquire about the more recent history, but they are all busy processing the pilgrim crowds. Finally one of them curiously approaches us, and we engage into conversation. He tells me that there are approximately 50 monks living on the mountain, the oldest being more than 90 years old. „When was this temple built?“ – I ask him. „During the Song dynasty“. „Yes, yes, it was established during Song, but when were the present structures built?“ The Master points to the new, polished stone and says firmly: “This is from the Song!”. Finally he concedes that the buildings were repaired in the 80ties and hurries back to attend the needs of other pilgrims.

Our next stop is the second major temple on the mountain – the Temple of Myriad Tranquilities of the Primordial Talisman. The pilgrims and tourists are more numerous here and the Daoist monks seem to be even busier directing and instructing the worshipers, writing talismans, addressing prayers. We are quickly spotted and two monks rush to usher us in the hall with numerous effigies of stellar divinities. Unfortunately, their zeal has the opposite effect, for Sarah and Nora hide in panic behind my back, clutching to my legs and refusing to go inside. I have to decline the offer to worship, and say that I had already “baibai”-ed at the Temple of the Myriad Blessings. The monks, however, are persistent – the prayers here, they tell me, – are eighteen times more efficient than in the other temple. Probably because they are addressed right in front of the largest existing Laozi, who towers above the hall. Soon we stand below the shiny, 33 m. high bronze statue – the biggest open-air Laozi in the whole world, already entered in the Guiness book. “Wow, what long fingernails” says Sarah enviously. 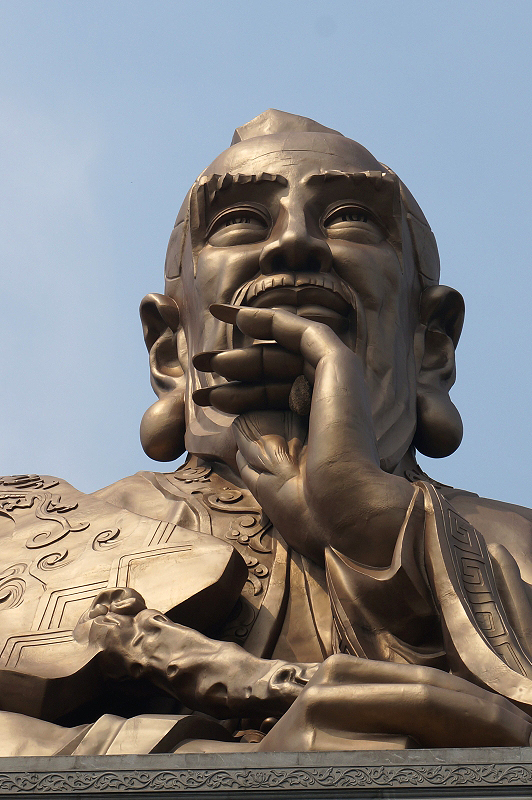 And then we roam the slopes under Laozi, site of some of the earliest temples on the mountain. We enter even the Cave of the Immortals – may be one of those elusive gates into the paradise hidden within mountain, that were described in early medieval texts. Nowadays there is a paved path and bridges leading into the depths which are illuminated in red and green. 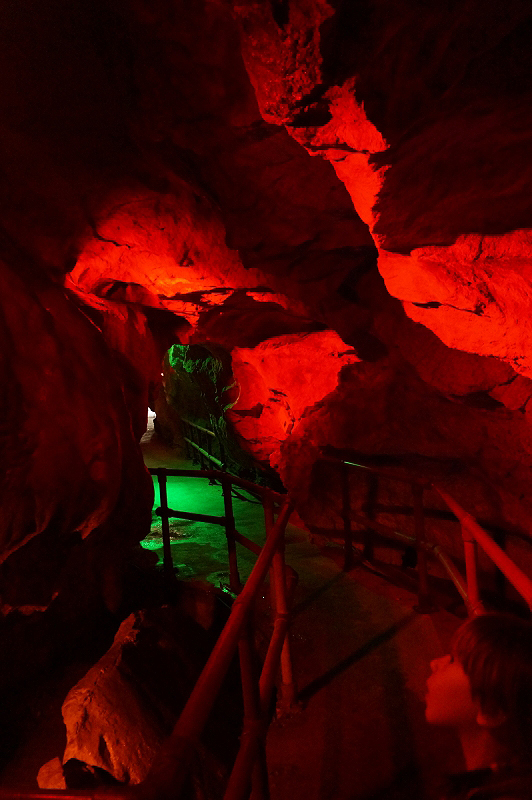 The area outside the temples is deserted in the late afternoon, and we enjoy the peaceful walk along a stream among decorative plants and shrubberies, all meticulously maintained. The Daoist revival of the mountain/ The Daoist development of the mountain conceives it not only as a destination of religious pilgrimage, but as an ecotourism site as well, encompassing modern green technologies such as electrical busses and solar panels in the temples. 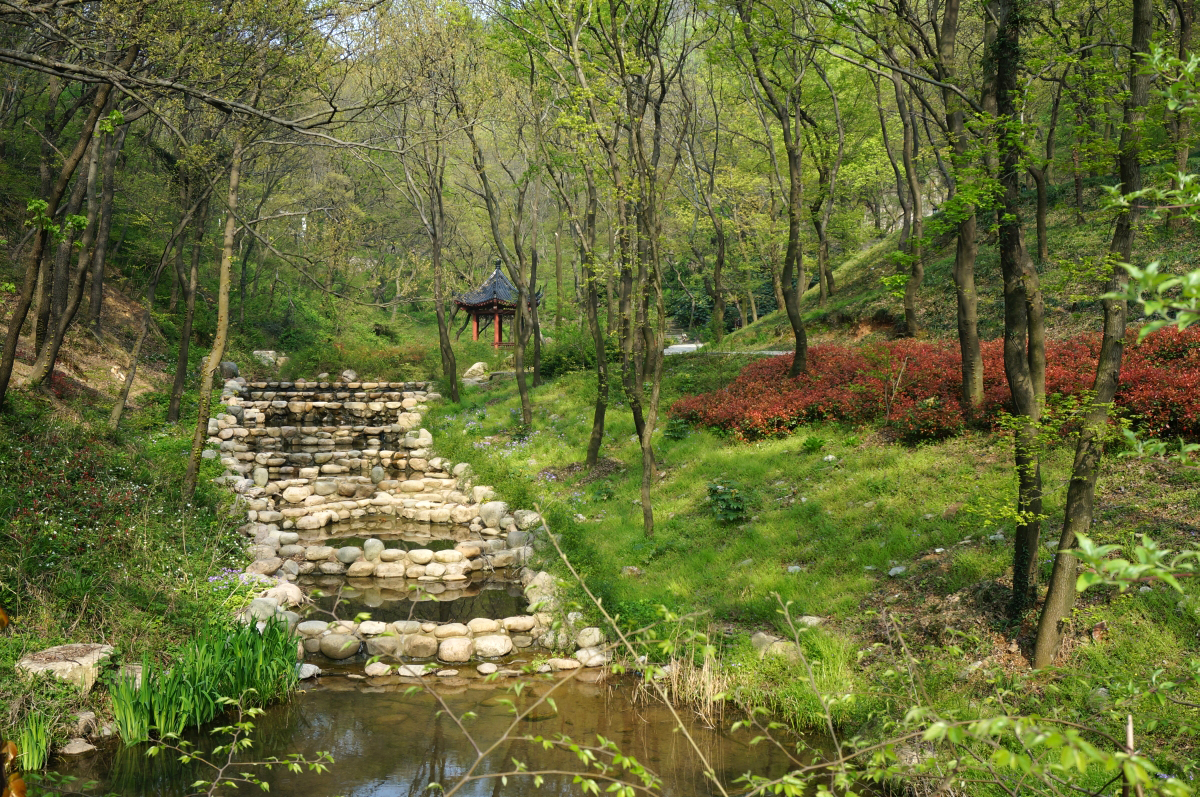 A side path leads us to an enormous temple complex still under construction. Two cranes are working in the distance, half of the highway is not finished yet, the pilgrims are yet to come, but the gardens around are already laid out, the shrubberies and decorative trees carefully trimmed. 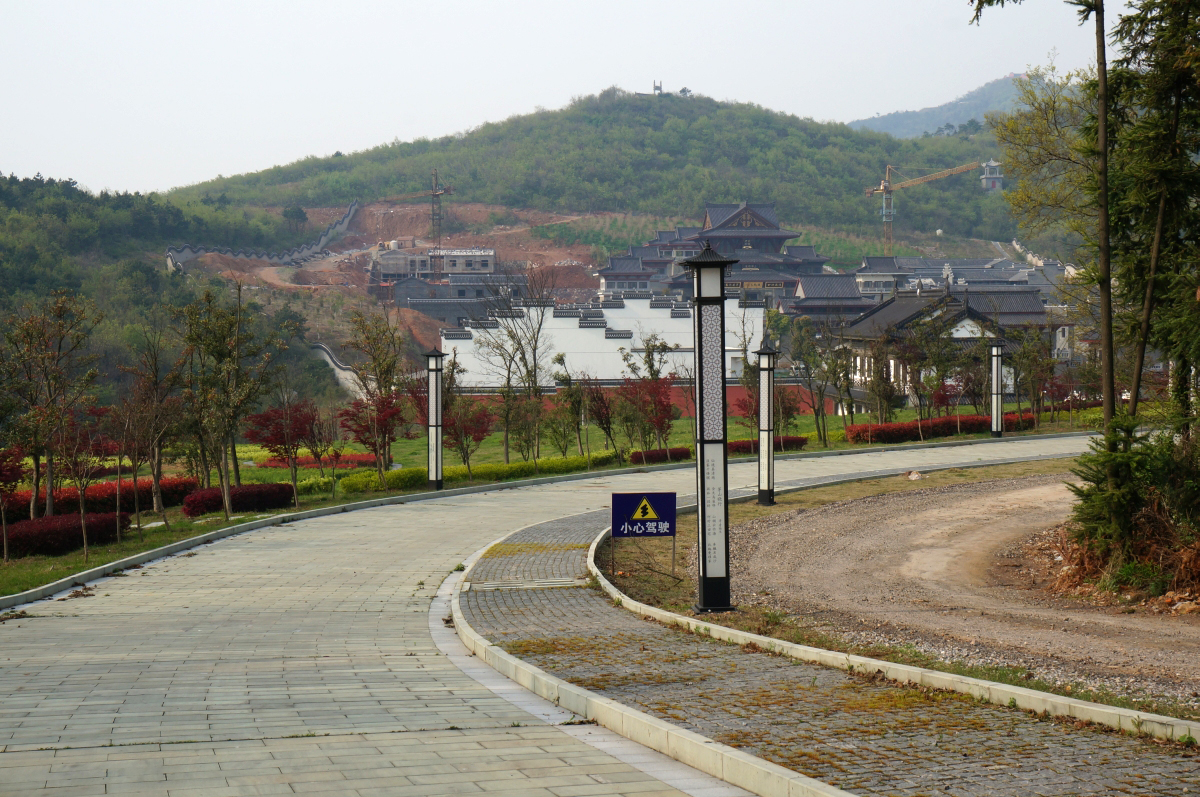 Although the day was almost finished, it still held surprises for us. While trekking towards the nearest bus stop, we came upon a pond and a sign pointing towards “Prince Zhaoming Reading Room”. Xiao Tong, the Crown Prince Zhaoming of the Liang Dynasty, who lived in the early 6th century, is known as the compiler of the great early anthology “Selections of Refined Literature”, which had determined for many centuries the Chinese concept of belle-lettres. The path finished at a small shrine. And there he was on the altar: the Crown Prince and accomplished writer, transformed into a popular god. His gilded statue stood among several statues of the Buddhist goddess of Mercy Guanyin, in front of the ox, on which Laozi rode to the west, surrounded the gods of the Chinese zodiac. I lighted my last three incense sticks in front of his shrine. 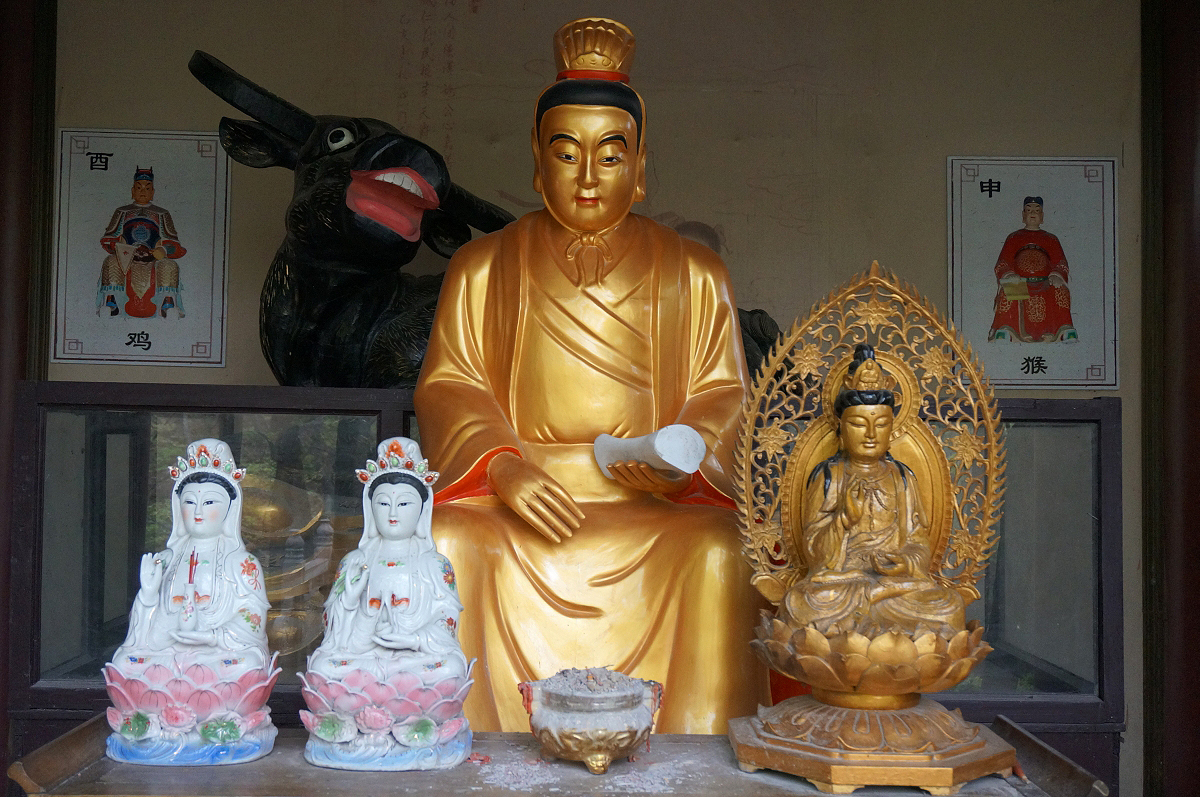 And back into the bus heading towards the village. Some of the pilgrims, after having paid their respects to the three Mao brothers and to Laozi, got off at the Anti-Japanese Resistance Memorial, and slowly started in the falling dusk the long ascent to the obelisk.

Powered by China By Bike